Face plants are always funny but sometimes they’re just frigging hilarious.  Especially if it didn’t happen to you or a loved one.  No wait, that’s wrong.  Face plants are especially funny when it happens to someone you love…

I’m sure the guy/girl/friend/mother/uncle who was taping this little treasure had to be admitted to hospital, suffering a torn spleen caused by hysterical laughter, moments later.

It’s also the reason why I prefer to just lie on a beach and do nothing.  I have no intention of landing arse in the air with my head in the sand.

I suspect the photographer was an ex-lover of the bride.  Or a disgruntled father-in-law.

Talk about taking a cold shower.

On the 27th of April South Africa celebrates freedom day.  This year the commemorative day falls on a Monday.  Which means…LONG WEEKEND! And as most working people know, long weekend is a synonym for GETAWAY!

Whilst most South Africans were celebrating their freedom by listening to boring speeches from countless politicians across the country, I was spending mine being freed from my normal daily routine, which can kill you, by the way.

We eloped to the East coast of the country, known for its pristine beaches and the warm Indian ocean.  Warm water becomes important as one gets older.  Especially considering that there might be a change of you entering the sea when the scorching African sun takes its job a little too seriously. END_OF_DOCUMENT_TOKEN_TO_BE_REPLACED 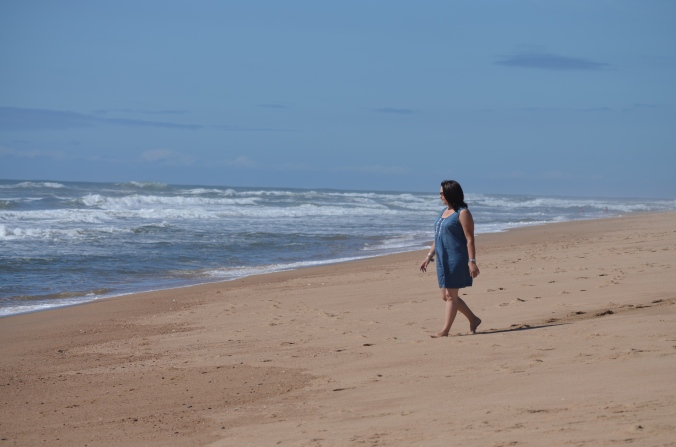 Even though it seems like she owns the beach, she doesn’t. I didn’t marry for money. But it’s all a matter of where you are and what you see aka perspective.

(Must admit with all the hours I spend writing, I haven’t given that much attention to my other passion in life.) 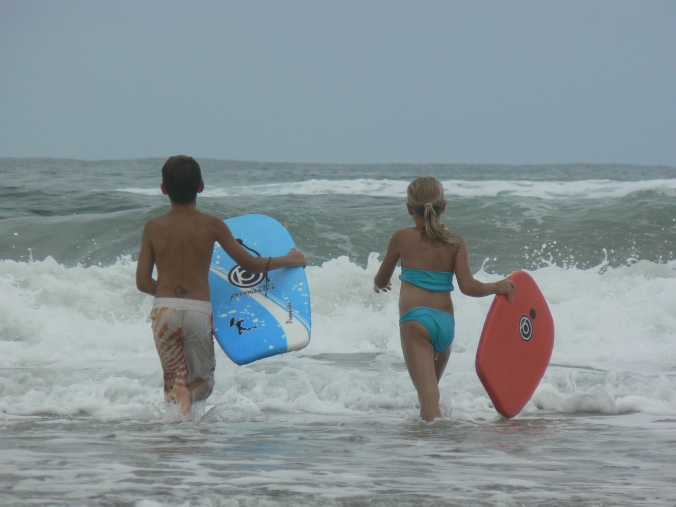 Kids attempted bodysurfing during a recent summer holiday.  We freaked out completely at how grown-up they looked.  We even cried a little.

My wife had the weirdest dream last night, so strange that I cannot fathom anyone contemplating it’s meaning on any level.  Not even theories of subconscious thinking can motivate the sequences she had last night.

This is the scene.  We were sitting on a beach somewhere.  (I was grateful to still be part of her dreams, never mind how weird they might be)  She was sitting in the sand waiting for me to finish something.  Don’t know what, but it obviously had to be something one would do on a beach.  Like tanning?  Building sand castles maybe?  Not sure.  Whilst waiting for me to finish whatever mysterious activity I was busy with, she started thinking about people losing money in the sand.  Maybe she can find something?

She started digging, right where she sat and as per her dream, she hit the jackpot.  Not just a few measly coins, but cold hard cash and heaps of it.  My wife basically told me that with every scoop of sand she had notes in her hand.  She did what any sane person would do in this situation, she tucked all the notes in her shirt.  After a while she looked up, with a shirt stuffed with cash, waived at me to come over and then, to her utter surprise, saw the person who left the cash in the sand, looking at her.

Before I continue, I need to check if all my readers are still on board,  I wouldn’t blame anyone for re-reading the paragraphs just to avail themselves of the facts.  It’s only just a dream. (Thanks Nelly!)

I don’t know who the person was, neither did she. (Obviously some stupid prick who hasn’t heard of banks before.)  But this is where it becomes interesting.  As law abiding citizens we generally stick to the right side of the law, maybe with a speeding fine here and there, but we don’t even litter!  Depressing isn’t it?  No, we are just domesticated.  In any case in this dreamscape version of us, we turned into a regular Bonnie and Clyde; you see we didn’t return the money, we decided to make a run for it.

I like to think that we got away with speed and agility and that I was the hero who made all the right choices during the chase.  I see the movie: Modern day thieves running from a beach; chased by a crazed lunatic who hid his cash in the sand!  And do you see the notes flying from the wife’s shirt whilst we run?

So we made it to the family car (I said we were domesticated, didn’t I?) and sped off.  We stopped at some random building, ran in, hiding amongst corridors and offices to eventually evade our pursuers, cash in hand, or rather in shirt…

As the wife was retelling her dream, I was anxiously waiting for the final scene, but alas like all great dreams, I never heard the ending, thanks to Mr Alarm Clock who started screaming @ 05h15.  But I can always try and write an ending… Nah.

There are so many questions I had for my wife, but I was so entertained by the dream, I didn’t ask a single one.  There might be some good reasons for the dream, some macabre meaning to it, but sometimes we should just do what the writer in Life of Pi did: Just enjoy the elaborate story, because like that movie, this was a good one.

Oh and one more thing, this dream is proof that the female mind are complicated and fascinating 24 hours of the day, not just when they interact with men.

When you look at the ocean from a beach in Mauritius you see serenity and calmness, amazing sunsets colouring the horizon orange and red and amber; from the comfort of a deck chair with a long cocktail in your hand.  When you stand on the Wild Coast of Africa you see the ferocious waves breaking, the wind bellowing at your shirt and the spray wetting your face.  You are greeted by desolate skeletons of ships, memorials to glorious history.  The same ocean, but worlds apart.  Both views allow you to appreciate the volume of water as far as your eyes can see.  Blue and wide and deep.

Exactly like human emotion and opinion, where one situation can cause two people to have widely different views.  Where two people can experience the same thing but choose to react in ways that are fundamentally different from one another.

Sometimes the reality of a situation is bleak.  One cannot argue with the facts when it does not promote hope or courage or motivation.  The Titanic struck an iceberg.  It was sinking.  There was not enough lifeboats.  The water was cold.  People were going to die.  When life hands you those kinda cards, how do you continue playing?  How do you keep a positive outlook?  How do you keep afloat in the icy water when everyone else around you is drowning in their ocean of cynicism?

If I had the answer to this question I would probably be a very successful (and extremely rich) motivational speaker, which I’m not.  I am just a frustrated man who does not understand why most people choose to give up, why they choose to shout their views of failure, to only bring problems and reasons why something cannot be done.

I probably sound like a broken record, especially to those who have been following me for a while, but I firmly believe that every reaction on every situation is a personal choice.  I would be a liar if I have to say I am happy all the time, but I choose to keep criticism to myself, I choose to not talk about the problems constantly and I choose to look at the successes.  I choose to avoid negative influences in my life.

I know now, that no matter how motivated I am, the decision on how to react to a situation is an individual quest.  I have come to realise that the environment where people move, will further influence their decision and ultimate reaction.  If you surround yourself with more and more people who share a similar opinion, you will probably end  up with that opinion rubbing off on you.

Like the smell of smoke when you stand next to an open fire on a cold night.  You might not be aware of the smell, just enjoying the feeling of warmth and knowing that you belong somewhere.  But the next day you will, the smell will stick to your clothes and your hair.

It is not that people in groups can’t think for themselves; it’s just easier not too.  When you are bombarded with different variations of the same opinion you will eventually conform.  Feel like they do.  You will be sucked into the vortex and not even realise that you are becoming just another generic voice in a growing crowd.

Fortunately this is true for both sides of the coin.  I know it is not easy to be the optimist in a sea of pessimists, but imagine being the only pessimist in a sea of optimists.  Imagine for a moment how different life could be.  Maybe I do have the answer for my own question, asked in the beginning of this piece.

There has to be a balance in power for all the cynics out there, my people, the crusaders for optimism.  Seek them out and invite them into your inner circle.  Make them your shield against the attack of the opposites, so that you can remain strong and shine the light in the darkness.  Become the majority.  Seek other swimmers and blow your whistle even if your lips are frozen blue.  They are out there, those willing to survive, those who has not given up.

(For balance and reason, include some realists in your circle too, they anchor us.)