I’m not a prune.  I have used the f-bomb before.  Yes, even on this site.  I use shit often, at least once a day.  It’s a regular thing.  I’ll giggle at a dirty joke and if it’s really dark, I might even burst out of laughter and then cover my mouth in shame, especially if Wife’s around.  As a rule I tend to avoid r-rated stuff when I’m around my kids, because they’re a… you know, my kids. END_OF_DOCUMENT_TOKEN_TO_BE_REPLACED

I follow Time magazine because let’s face it, I need some intellectual input in my life as well. I need all the help I can get.

And that is why I know the bikini is a geriatric this week. And one of the main reasons why most men have been rejoicing for decades! 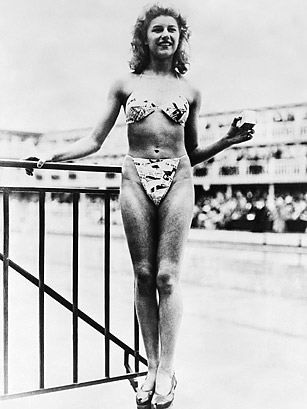 “Isn’t this a little bit sexist?” asked no man ever.

Hop over to the link and see how swimsuits evolved since the Victorian era up to the birth of the bikini seventy years ago.  It starts off with a woolen jacket on a provocative pose in 1840.  Then moves through an array of dresses in the early 1900’s that was subject to length violations.  Then it jumps to body-hugging leotards in the 1930’s, until the big reveal of a small bikini worn by a 19-year-old nude dancer, named Micheline Bernardini, for a beauty contest in Paris in 1946. Because where else? END_OF_DOCUMENT_TOKEN_TO_BE_REPLACED

Dashing features are not helping him here.

Have you seen these lately? It’s called a man-bun and it is frigging atrocious.

For everything it might be, it is NOT a hairstyle. I battle to fathom why any person would willingly walk around in public with that thing on top of your head.  However, I have considered a few plausible reasons:

(1) You have been infected by some unknown virus which starts off by attacking your self-worth until all traces of dignity is annihilated.  Then it moves on to the second phase where it manifests itself on top of your head in a little, pathetic excuse of a hairstyle. END_OF_DOCUMENT_TOKEN_TO_BE_REPLACED

Good morning, afternoon and evening to you all.  My name is Ah Dad and I am a Superheriolic.  (Also evidently, slightly confused about time-zones.)  It has been more than two weeks since my last viewing.  And that was a re-run of the first Superman.  What can I say, I was desperate.

Most of my regular peeps (I’m tryin’ to be hip and cool in front of the kids) would know that I am proudly geek and have an unrealistic love of all things super, including my Wife. END_OF_DOCUMENT_TOKEN_TO_BE_REPLACED

The premise was phenomenally original: Eighties arcade games invading earth! Who doesn’t remember spending copious amounts of coins trying to eat dots AND outrun those four coloured ghosts?  Or destroy row after row of Space Invaders?  The short film which the movie was based on blew me away to the point of contributing to almost 50% of the almost 1,4 million YouTube views. I couldn’t contain my excitement when I heard that they’re planning a full length movie. I was so happy,  I ran around town yelling at random people: “Did you hear?  Did you hear?”  I kind of regret that now.  Moving on…

Then came the biggest let down of the century.  Even worse than the time when I realised she was a he. END_OF_DOCUMENT_TOKEN_TO_BE_REPLACED

Even if I could, I’m not sure if I would…

I see people when I travel to far and distant lands. Lots and lots of different people from all walks of life.  Thick ones, thin ones, tall ones and short ones. Black and white, gay and straight.  And none of them are dead.  Because I cannot see dead people.  In my observations I have noticed a growing trend.  Beards are back.  Mostly on men.  No longer does a furry face imply that you’re homeless. Or Santa Clause.  Hair is now gracing the jaws of frat boys, artists, sportsmen and even a cross dresser or two. END_OF_DOCUMENT_TOKEN_TO_BE_REPLACED

No roller-coaster can hold a candle to the real life twists and turns we encounter during our daily existence on this planet of ours.  People provide excitement, surprises, irony, weirdness and many other thrills, chills and spills that no man-made joyride can even attempt to reciprocate.  And I’m not even referring to the usual suspects like Miley, Kanye or Lady Gaga.

I just read an article on http://www.billboard.com where Art Garfunkel called his once, long time collaborator, Paul Simon, amongst other things a “monster”, “jerk” and “idiot” for leaving him in 1971 at the height of the duo’s career.  Bitter anyone?  For those of you who were born in the nineties or have been living under a rock, the duo I’m referring to is none other than Simon and Garfunkel.  Still doesn’t ring a bell?  “Mrs Robinson, are you trying to seduce me?”  Still not?  I have to admit it was also before my time, as my Dad was still trying to get to first base whilst that song played on the radio.

The long and short of it is that Paul Simon dumped Art Garfunkel and went on his own merry way, wearing diamonds on the soles of his shoes, just as Bridge over troubled water became a world-wide phenomenon.  It became their signature song from their fifth and final album.  Not only did this song chart in every country, except Middle Earth and Panem, it also won six Grammy’s.  And sold over six million copies. (Too many sixes maybe…da da da…)

“I didn’t leave him because of his hair, I swear”, said Paul Simon. (allegedly)
Photo courtesy of Wikipedia.

The irony is that this song was actually performed as a solo by Garfunkel himself.  Simon wanted bigger things, told Garfunkel to call him Al if he ever wanted to call him and left.  Art having lost half of the band’s name, became a math teacher.  Let it be known that there is nothing wrong with being a math teacher or a kindergarden teacher for that matter, but it’s merely another example of why we have the phrase “WTF?”  Truth is indeed stranger than fiction.  You can read the full article here, but please remember to close your mouth after you finished as it might be fly season.

There may be those who would argue that Art had reason to go public in a semi-rant over his long-lost pal.  And these arguments would fall in the same category as those defending the existence of fairies and other bull shit.  Not that I think fairies are bull shit, I just don’t think they exist.  Like the Tooth F… um, I mean like Santa Cl…shucks.

The reason for his badmouthing and foul mood is an obvious pile of sour grapes.  What is even more shocking is the fact that 1970 was 45 years ago and old Art is still filled with resentment at Paul for seeking a successful solo career.  Way. Back. When.  Talk about beating a dead horse. Art Garfunkel gives new meaning to the concept of keeping grudges.  And seeking publicity.  And being a douchebag.

Don’t you think it’s time to move on?  Get over it?  And maybe do something about your hair?  Ever heard of gel? Or scissors? We’re not in the eighties anymore, my friend.

Looking back, you guys made great music, had a good run, did a few gigs together, became famous, and then they threw in a lifetime Grammy for good measure.  So. Just. Let it go.  It’s time to built your own little BRIDGE OVER TROUBLED WATER.  A song that came full circle, performed by the great Simon and Garfunkel, or a duo I’m now going to call the “The Grinch and Paul Simon”.