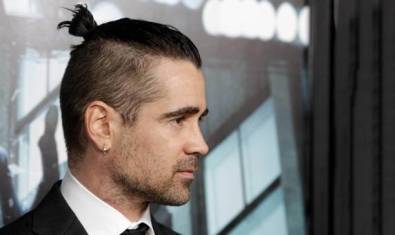 Dashing features are not helping him here.

Have you seen these lately? It’s called a man-bun and it is frigging atrocious.

For everything it might be, it is NOT a hairstyle. I battle to fathom why any person would willingly walk around in public with that thing on top of your head.  However, I have considered a few plausible reasons:

(1) You have been infected by some unknown virus which starts off by attacking your self-worth until all traces of dignity is annihilated.  Then it moves on to the second phase where it manifests itself on top of your head in a little, pathetic excuse of a hairstyle.

(2) You have been single for a VERY long time and met up with a group of drunk girls at a bar, who could smell your desperation and cologne a mile away.  They realized the depth of your gullibility and then made a random joke about how sexy a man-bun would be.  And you believed them.  And you’re probably still single.

(3) You’ve made an appointment at one of those upper class establishments to have your hair styled because your girlfriend thought it was a good idea to use a professional for a change.  Someone who will gladly take half your salary and three hours of your life.  After the first hour you casually ask her how much this hairstylist is going to charge you for this indulgence.  She corrects you on his gender and tells you the price.  You freak out like a toddler for a tit and run out of the salon with the little dignity you have left.  And half a haircut.

(4) You saw a picture of some buff dude in a fashion magazine who was sporting the look with an accompanied freshly trimmed beard.  You thought it looked cool.  He was wearing a red-checkered lumberjack shirt.  You though it made him looked utterly handsome and desirable.  You drooled a little. Then you couldn’t get the picture out of your head and opted for a copy of the look.  Even though you don’t have the beard or muscular torso.  Now you just look stupid and don’t know why.

(5) You belong to a secret tribe of ancient Samurai warriors who has perfected the flying-tiger-eagle-swoop-kick-combo-move-thingy but have not found a cause worthy enough to die for.  You are required to grow your hair and look like a douche in order to find your inner being.  You have conquered the ability to inhale smoke and not exhale for 19 seconds but with all these achievements you’re still stuck in your day job as a petrol attendant/sign-board flipper/Happy meal box folder.

(6) You lost a bet where ALL your mates told you that it would not be possible to shove ten pool balls up your arse. And you gave up at seven. At least you have a funny walk to go with your funny hairstyle.

The bottom line, dearest readers, is that I think this hairstyle is ridiculous.  But who cares what I think, they seem to be sprouting everywhere.  There is even a website.  (Off course there is!)

The sites claims that the most essential thing you need for growing a man bun would be to have long hair. I have to disagree with this.  You need long hair AND a desperate need for attention.  It goes without saying that long hair = man-bun.  Much like man-bun = no date with Princess. EVER.

Did you know that there are two types of man-buns?  The irony is that a semi-bun makes you look even more obnoxious and crazy than the full man-bun alternative.

Don’t get me wrong, men are allowed to have long hair.  If your name is Thor.  And when you have the body of Thor, who’s the God of Thunder, you may wear your hair any which fucking way you please.  If only for the fact that you can beat the shit out of anyone who might think otherwise. 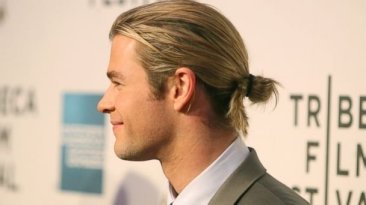 But most other men simply look ridiculous with this thing on their heads.  How am I suppose to take you seriously if you choose to look like a bad meme? Case in point… 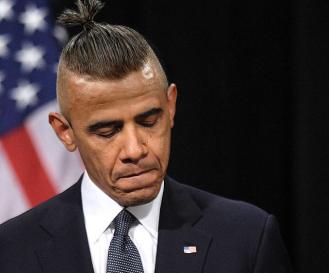 The most powerful man in the world is still not Thor

Now if there are guys who would like to dress up as the saddest-guy-in-history for your next Halloween party, I’ve found the perfect costume.  Just wear your normal clothes and get this clip-on version of the man-bun.  Simply because growing one is NOT ridiculous enough. 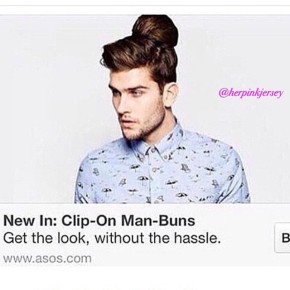 I needed the money…I’m sorry.

Has humanity become so brainwashed that we will blindly follow ANY fashion trend that’s out there?  Has society turned into a flock of sheep where we are willing to accept anyone’s warped sense of what is deemed fashionable?  Or have we simply lost the ability to use a mirror properly?

Maybe I am just an old fart who doesn’t understand progressive trends…And if that is the case, please give me ample warning as to when I can expect people to start wearing other people… 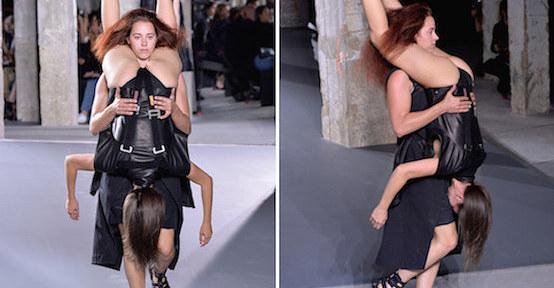 This seems normal if you’re a frigging lunatic