This is serious, for I would never joke about a mental condition. 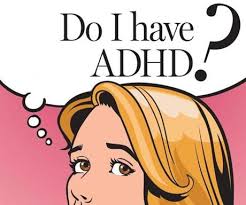 The wife seems to think so…

I think I have Adult ADHD.  I’ve done nine on-line surveys to check my suspicion.  I didn’t believe the results of the first eight.  There’s a few shady sites on the world wide web.  Besides some of those tests were really long and boring and tedious and I had to write a post and have lunch and put on pants, in between all of that.

Must admit, I have been diagnosed by the wife ages ago.  She’s known of my perceived condition since we met.  I’ve learned that my idiosyncrasies and flawed behaviour was never considered cute.  As she knew (or at least expected), she’s been conspiring behind my back, treating me like one of the kids in her class that suffers from the same condition.  Implying short instructions, checking understanding and using a lot of patience and love.

She raised the issue again last week and I decided to supply proof of her misguided understanding of what it means to be driven and to live in a world that’s filled with lazy, incompetent people that take forever to make a Big Mac Burger.

Many men will ask the obvious question:  “Why would you want to place yourself in that kind of confrontation?”  To which I would reply, “I honestly don’t know…” Oh wait, I do actually…

On to the survey.  Your final score is grouped in one of five categories.

I scored 35 on the third try of the ninth test.  It actually came down from my initial score of 43 on the first test.  But that first test was just plain ridiculous.  I mean come on: I’m a contributing member of society, a father of two beautiful children and a devoted husband.  The mere fact that I’m slightly driven, interrupt people constantly and blog like I have OCD, doesn’t mean I have a mental condition.  Does it?

In the end, all arguments fly out the window like bats in the evening.  The numbers are clear.  Ok, fine, I tweaked my score from 37.

37.  Thirty-fucking-seven.  (Sorry Son, an f-bomb is required)  The wife was right all along.  Don’t you just hate it, when that happens…

When I divulged my initial score, (again why would I do that?) she tried her best to retain, at least some composure, but failed miserably, in her (let’s-be-honest) very weak attempt.  She ended up hanging on the staircase, the only thing keeping her off the floor, laughing hysterically.  I was looking for a cloth, to clean-up the inevitable accident that was sure to follow.  I stood watching her, feeling like I’ve just seen the assassination of a puppy.  She didn’t get anything for Mother’s Day.

Just to be clear, there are two portions of the test, the first part tests your attention- and the second your hyperactive traits.  I passed the first section, but failed miserably on section 2.

In order to enlighten those uninformed adults, whom like me, were oblivious to something everyone else knows, here is a few clues.  If you consider one or more of the following points as an accurate description of a specific situation you might have found yourself in, than my friend, here’s some Ritalin for you.

1. If you don’t like waiting.  Wait.  Let’s rephrase that.  When you stand in a queue and it feels like nothing’s happening and you’re considering how to get rid of the bodies of the six people that’s in front of you, because all the idiots of the world decided to work at the local bank and they’re going to make your head explode… Then you might have Adult ADHD.

2. If you finish other people’s sentences, or jump in with the punch-line of a story, and you think you do it because you know them so well, when in actual fact you’re doing it because you find their manner of speech to be slower than the character development of Dora the Explorer… then you might have Adult ADHD.

3. If you constantly interrupt other people, assuming that everything coming out of your mouth would be considered more important than what’s coming out of theirs… then you might have Adult ADHD.

4. If it is time for the month report and you contemplate jumping of a cliff, lying on a bed of nails or spending time with that fat aunt with extreme body-odour issues, as a preferred way of spending your time…then you might have Adult ADHD.

5.  If you watch TV and start to follow the storyline of the latest Revlon cosmetic advertisement because you’ve never heard someone said; “You’re worth it” and then have the audacity to yell “Quiet” to all the family members in the adjacent room, who’s ruining the experience by discussing their day… then you might have ADHD.

6. If you consider yourself a champion procrastinator, someone who lives from deadline to deadline like a crazed heroin addict.  Working compulsively at the last minute, attempting to finish that thing you’ve known about for a year, barking at every person who tries to formulate a discussion during those stressful times…then you might have Adult ADHD.

7. If you keep forgetting where you’ve put the keys, wallet, glasses and I-pod, (or constantly checking whether you have them) and then proceed to blame everyone and anyone, even the poor dog, for moving the frigging stuff around all the time…then you might have Adult ADHD.

Or if you become enthralled in a new project/activity to the point of it becoming an obession, and you start to ignore all other forms of social interaction, neglecting your family and/or you carry your phone everywhere, just to ensure you don’t miss a comment or an update or a new follower… then you might have Adult ADHD.  Or you’re just blogging.

But I’m grateful.  At least I know.  And the first step to solving any problem is accepting that you have one.  It’s a great excuse for my erratic behaviour and it’s nice to know that some of my ass-like, douche-invested actions, was the result of a medical condition.

PS – If you wish to complete the survey here it is.  Unless you want to do the electronic version of the test, because printing, reading and writing is just such a long-winded, boring series of activities….In which case you probably don’t need to do the test at all.

Music, Movie, TV and Pop Culture News for the Mainstream and Underground